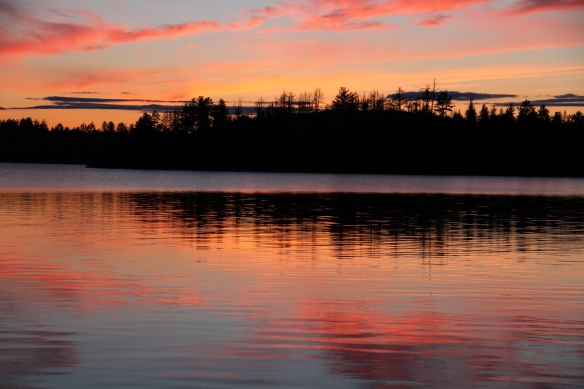 Well summer has been here for a while now in central MN, with lots of moisture early on, high temps and lots of mosquitoes. The grass and garden have been doing quite well. The raspberries are the best ever with over a gallon frozen so far; the peas, zucchini and beans are feeding us, and our 6 foot high heirloom tomatoes are just a few days away from first ripening. The long cold spring we had that delayed the maple syrup season(plus 12 inches of snow in the middle of April) was just a delay and now the weather has definitely pushed things along.

So with everything running well it seemed like a good time for a trip, a canoe trip. Three of us would go: myself, my brother Tim, and his boy Adam. This was Adam’s second trip. The forecast sounded interesting: heat and humidity, rain, and also cooler temps. Yes the weather would be pivotal in the mood of the trip, going from oppressive, to downright nasty, to utterly delightful.

We started on a calm, drizzly, quite warm(80’s), humid Wednesday on Snowbank Lake in the BWCA. It would be the last time anything would be reasonably dry until Friday. We were warned about the mosquitoes on the portages but didn’t have it real bad until the last portage of the day, a 220 rod(320 to the mile) hike. Here the heat, humidity, and bugs joined forces. Since we were double tripping(making two trips to get everything over) we really had a chance to get miserably acquainted with the bugs. 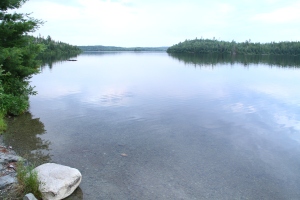 The North country had had a lot of rain and the water levels and mud puddles proved it. Any rocks on the portages were damp and very slippery, which made good footing rare at times. Between the rocks and ankle-deep muddy puddles we all slipped at least once; my worst when I was carrying my day pack and canoe. I tried to go around a puddle and as I planted my left foot it slipped out to my right. As I staggered to my left, my right foot kept me up and then my left brought me back upright. Just barely. And with high water levels come stagnant pools which are ideal for mosquito breeding, which means it’s been one continuous mosquito love fest. The DEET ran right off in our sweat and had to be reapplied frequently, with little effect. At this point our spirits were still good, and we were amazed at the aggressiveness of the bugs. Over the next few days this attitude would change.

We made camp at midday on Ensign Lake on a point that exposed us to any wind that might arise. Baked beans and wild rice brats for supper. The bugs invited themselves to the meal, dining on us. The wind, although invited as well, apparently had a prior commitment, leaving the situation tense. The supply of bug spray was dropping faster than normal, causing one to think of rationing. After supper we clambered into the tent for relief, only to find we had about two dozen tag-alongs that took the better part of a half hour to eliminate. Needless to say the tent was quite stuffy. 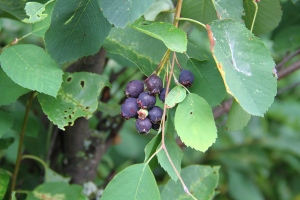 That first night we had no less than 3 heavy downpours, which soaked anything we had hung out in an attempt to dry. Between the showers could be heard the steady whine of thousands of tiny wings looking for blood. 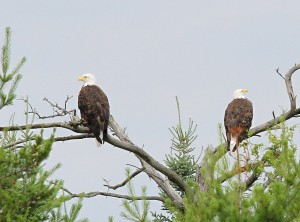 We saw a good number of eagles in the area.

I was awakened by voices; a party of canoers passing by on their way to the next lake. It was only about 6:30 am. It would be the first of many parties to pass by our campsite over the next two days. Throughout the morning a party would go by about every half hour. I had no idea this was such a popular route. We spent most of the day trying to dry out and relax. Fishing produced only a few hammer-handles. We gathered more firewood down the shore and found that the serviceberries were ripe. They became Adam’s favorite food for the trip. The area we were in was a fairly “young” forest with lots of aspen and younger conifers. It looked like a fire had gone through awhile ago, leaving just scattered white pine. In the fire’s wake sprang up blueberries, raspberries, fireweed, serviceberries and the aspen. Much of it looked like good grouse habitat.

We got out fishing in the afternoon when the weather looked more promising. I went one way in my solo canoe while Adam and Tim moved down a different shore. The wind picked up a bit and then the sky turned dark to the northwest. I was trolling and had a snag just as the weather worsened. I made it to the leeward side of an island just as the gust front ripped across the lake toward me. I pulled up the canoe and turned to see a wall of rain bearing down on me. I got my rain suit on just as it hit. I sat on the island about half an hour before being able to go back out, and then headed west down the lake trolling again. I got a hard bite by a small island, and right away could tell it was a good fish.  At that point I was drifting with the wind and the fish brought the canoe to a stop. It just sat out there like a rock. When it did move I could really feel its power. My rod doubled over several times as it made runs, my drag squealing. It stayed down for quite a while, not giving me a look at all. It felt like a good northern. Finally after several runs it surfaced. A bass? Really? It was a big smallmouth that measured over 21 inches and had a huge potbelly. Somewhere around 5-6 pounds. The largest I’ve ever caught. (my 2nd largest came from Lac la Croix, also in BWCA). That was fun. I’ve heard these big bass this far north can be 20 years old. May it live a few more years I thought as I watched it swim away.

A bit later Tim and Adam caught up with me, having survived the storm at camp and still looking for some fish to eat. We headed further west down the lake to explore and fish. At this point we were all hungry and had no food in the boats. It was then that we saw a neat looking campsite and paddled over to check it out. What we found was a nice site with a perimeter of serviceberry shrubs. We picked and picked till we each probably ate well over a pint of berries. 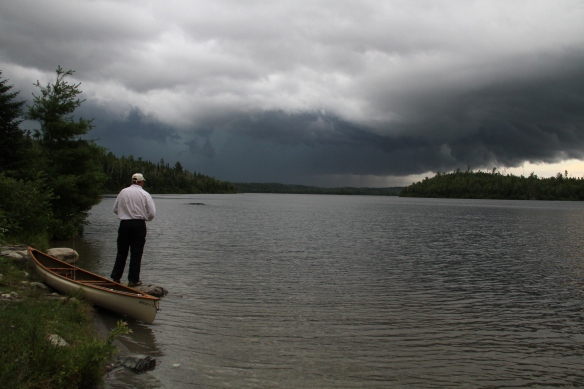 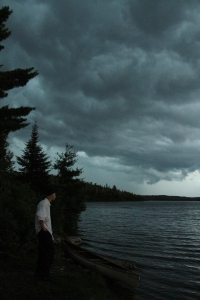 We went back to fishing and split up again. They headed back toward camp and I explored some of the empty campsites and found some really nice ones to keep in mind in the future. I eventually headed back to camp without any fish.

Later in the day the weather began to turn wet again with numerous showers, which meant we would eventually have to wait till quite late to make supper since we needed a fire to cook pork chops. It was then that the nasty weather showed up. The menacing clouds brought premature twilight and quite a light show. The rumbling of thunder increased in volume and was obviously headed our way. The next thing we know we have marble sized hail and then the gust front which brought horizontal rain. The ensuing downpour left us with a torrent running through camp you could kayak down. By the time it was over the sun and the wind had gone down. This allowed the bugs to move in. They really gathered around the fire’s heat, right where we were cooking, and no body parts were off-limits to them. Once again they ignored the bug spray, which became quite annoying. The best we could do was walk around the campsite with our plate, eating on the run. Again this was marginally successful. Things were said. At the end of the trip Adam would comment about this meal; how the food was good and everyone was walking around trying to eat, cussing the bugs! 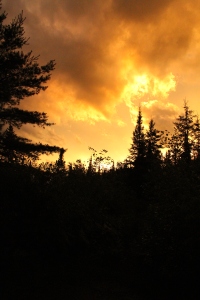 End of the storms, at sunset.

The next day the high pressure that trailed the storms moved in with good NW winds and drier air, so we took a day trip to look for trout, which took us over a neat 180 rod portage and two shorter ones that had tough landing sites. Missionary Lake runs east and west with water clarity over 20 feet. We drifted with the wind dragging heavy spoons down deep, hoping for a hit. Halfway down off a point I hooked a laker that stayed deep quite awhile before I first got a glimpse of it about 15 feet down. Tim’s digital scale put it at 2.75 pounds. 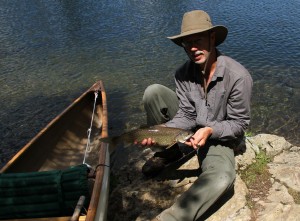 Enough for a meal. We fished a bit longer then portaged over to another lake with brook trout but had no luck there. We made decent time heading back to camp into the stiff headwind, stopping on a neat high open point for firewood. The wind kept most of the bugs at bay and the temps dropped as we enjoyed grilled trout and wild rice before nodding off. 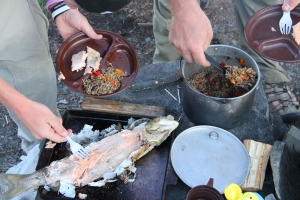 The next morning we had wild blueberry pancakes and maple syrup and then headed back toward Snowbank for one more day. The day was sunny and calm and as we crossed Ensign we saw a party of four canoes about half a mile down the lake to the west and because of the mirage effect they appeared to be floating above the water, with an occasional glint of sunlight off a paddle catching your eye. 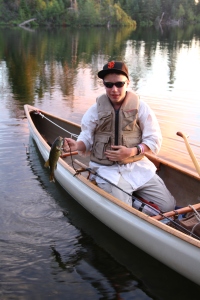 Adam with his supper. 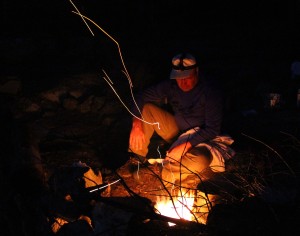 About two hours later we set up camp on the NE shore of Snowbank just off the outlet that leads to Ensign. We had great weather and spent the day fishing, gathering a couple nice smallmouth. We wanted one more for supper so Adam went out in the solo canoe in the early evening and came back with a keeper. The bugs left us alone long enough to eat and enjoy the evening fire one more time before heading home in the morning.

The last night was chilly, and we were up with the sun. We savored the last hours at the campsite before departing. It was a sunny morning as we crossed Snowbank one more time, and we had the lake to ourselves for most of the 3 mile paddle. A cool breeze kicked up and it felt good to want a long-sleeved shirt to brace against it. As a final gesture we were treated to a gathering of 6 eagles on a small island just a few hundred yards off our landing. We talked about that as we headed down the road. And talked about the next trip…