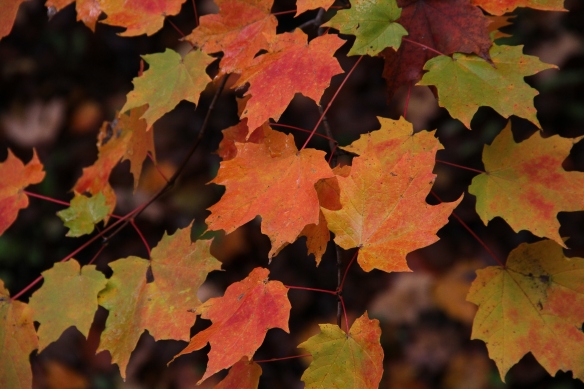 It’s mid September already and many people I’ve talked to say summer went by way too fast, especially those of younger school age. I remember when I was that young, thinking the same thing, because it seemed, living in the country, that summer always seemed to be filled with fun and adventure, between jobs, mowing, painting, pulling weeds, and all the other unspeakable tasks inflicted upon us by the adults in our lives.  So, we were never bored, and sometimes we actually looked forward to school starting so we could get away from these summer atrocities. However, parents always had the last laugh when in mid October the leaves fell by the billions from the “millions” of oak trees in the area, which actually led to another fun activity: burning leaves. These days we do the responsible thing and chop them up to turn into compost for the garden. How boring!

For me this summer was a busy one, with a new beagle puppy picked up in early June and the continuing work that goes along with puppies, a fun(yes fun) family reunion at the end of July, a canoe trip just days after the reunion, a fun weekend at a rendezvous up north, another good, busy vegetable garden, and ongoing remodeling of my small but full den/workshop downstairs. And then back to school. The leaves will soon follow. 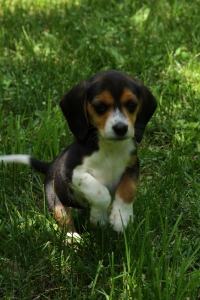 Yes it’s been busy with a new puppy to look after and train. There have been and still are many sleep deprived days as we work with Filson, the little guy’s name. He’s the 4th beagle we have raised and also the most challenging, elevating all previous ones, especially Buddy to sainthood. Good things sometimes take time.

We had a “dreaded” family reunion in July that was actually fun, with relatives from California, Texas, New York and elsewhere making the trek to central Minnesota; some I’ve never heard of and others I hadn’t seen in four decades. My mom and her sisters did most of the work and despite some minor glitches in a rather overwhelming task things went well. It was a good event to pull off since people aren’t getting any younger.

A canoe trip was taken in early August by myself, brother Tim, and his son Adam. We journeyed north from Kawishiwi Lake in the BWCA eventually staying on Polly and Malberg Lakes. The southern part of our route took us through parts of the Pagami Creek burn, a fire which took place in 2011. The resulting open landscape is interesting, allowing one to see for miles instead of feet into the “woods”. We stopped more than once to load up on ripe raspberries that sometimes were found in patches covering acres, one of the resulting after-effects of a forest fire. We also took a day trip to the east up the Louse River where we saw lots of neat scenery and had a blast catching walleye, smallmouth, and northerns. 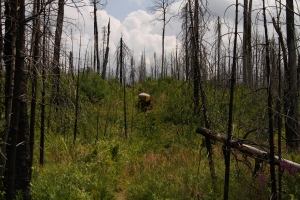 The end of our trip was unique; planning to stay on a lake about 2 1/2 hours from the vehicle, we instead offered our campsite to a group from California who had arrived late in the day and were without a campsite due to the fire three years ago(the remaining sites on the lake were wiped out by the fire). They 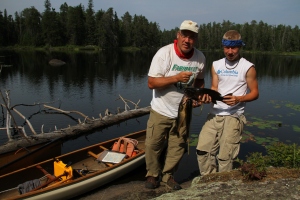 Good fishin’ in the BWCA

were rookies in the BWCA, with a long tough portage to the next lake that had campsites, and we were veterans of many trips who had already had their fun trip. Plus we knew, with our paddling strength we could cover the distance needed before sundown. We had to travel upstream, cross some short portages but employing racing style paddling made the difference. And Adam was the hero of the day: he gave it all he had despite the still sometimes intense nagging pain in his shoulder  from an ATV accident last fall. He cranked that paddle all the way to our destination and when we got there he got out of the canoe and just stood there bent over, holding his shoulder. But he said it was fun.

Mid August took the same three guys plus friend Dave to Perham, MN for their 30th? annual black powder shoot. We shot well, we shot poorly, shopped, ate well, laughed and we had fun. It was fun to see some of the acquaintances we have met over the years, some who are planning to come to our Rendezvous the first weekend in October. 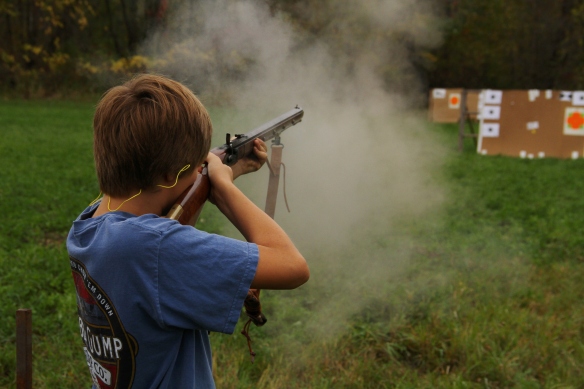 Which brings me to our next event: the 8th Annual Avon Hills Rendezvous and Black Powder Shoot. This is held south of Avon in the hills, where fall colors are always great. It’s an event where friends, family, and anyone who wants to can come “rendezvous”  or gather together to shoot black powder, archery, throw tomahawk, eat, sing, and generally have good clean family fun. Historically a “rendezvous” was held once a year, sometimes at the same site. It was a time when trappers and traders, natives and fur company officials alike would get together to trade furs, goods, supplies, stories, and lies. There would be contests of shooting and throwing, drinking of spirits, plus tall tales, eating, fighting, singing and anything else that might take place far from early 1800’s civilization. These events might last for weeks as it was the only time many of the people attending ever saw other humans.

Nowadays things are a bit different, less raucous.People still have a blast, but it’s good clean fun. Our rendezvous still employs some of the original events: shooting contests, throwing tomahawk, eating, laughing, making new friends. We also allow people to come and learn a new skill, try something new. In fact, it’s the

main reason we are out here in the woods on a beautiful October weekend in MN. If you have always wanted to try shooting a bow and arrow, or learn what a muzzleloader is and how to load and shoot it we can show you how it’s done. And you will have the opportunity to shoot. Want to try throwing a tomahawk, or maybe start a fire using flint and steel? How about a guided nature walk in the October woods? We have all of that and more 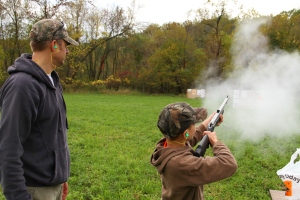 We will have limited concessions on hand, as well as a silent auction and trading post to help finance the event. The big draw for many, young and old alike is our Wes Leedahl Memorial drawings(see a list of prizes on our black powder shoot link above). 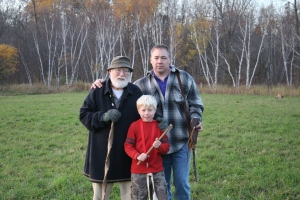 This is held in memory of my dad Wes, who, throughout much of his life introduced many of us to the outdoors, whether it was camping, canoe trips to the BWCA, hunting, fishing, or just being outside. He influenced our family and many others who still remember those early experiences  and are passing the torch to others.

Getting outside was and still is important to our well-being and that is one of our missions at the Black Powder Beagles; to get people back outside.

How many of us know what a small spring-fed trout creek looks like, or what a good grouse hunting woods contains and what it smells like in the fall. Have you ever noticed how a breeze so soft you can’t feel it will make the leaves on a quaking aspen whisper? How does a campfire burning oak smell compare to one burning birch? Have you ever just sat down outside, away from the city on a clear, calm, moonlit midwinter night when it’s well below zero and just looked at the stars and listened? How about listening to the high-pitched squeak of snow underfoot as you take a walk when it’s 10 below, and how that sounds different to when it’s 20 above zero. Have you ever been on a deer stand before sun-up and listened and watched as the world wakes up for the day? Or been on stand after a hard frost, listening to what sounds like rainfall, but it’s actually hundreds of leaves all falling at the same time. Have you ever taken a walk in the early spring woods as the early wildflowers are blooming, or been anywhere where it’s so quiet you not only can hear a pin drop, but you can hear the roar of silence in your ears; and you hear a rhythmic drumming that seems to come from nowhere, but actually it comes from within, your own heart beat. 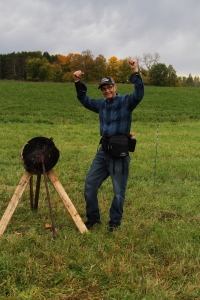 Come to our Rendezvous and have fun, learn something new, and share your outdoor experiences with us, we’ll listen. If you are on Facebook  visit our 8th annual Avon Hills Rendezvous and Black Powder Shoot  Event page, or go to the Black Powder  Beagles group and say hi!